TL:DR - we’re planning to send out a 5 minute weekly pulse survey asking you to share your feedback on how the app worked (or didn’t) for you.

As a user of the Status app, your experiences of the highs and lows of using the app are a valuable source of feedback. Especially because we’ve made a huge leap in switching off Slack and dogfooding the app together. We know it hasn’t been easy - and we want to make sure we’re making the best of this opportunity.

Experienced app data loss? Or maybe you had a joyful experience using a new feature? The survey will be an avenue enabling you to report back each week. We’ll email you each Friday with this survey, and ask you to answer 9 optional questions to give us as much or as little detail about using the app as you choose. The questions we ask will be around issues encountered and your habits when using Status.

Why we’re doing this

Communication is a challenge that’s raised by multiple people, and we want to get more frequent actionable data on how people interact with Status to better understand specific problem areas.

Why your survey responses are important

This is our primary communication tool and we want to make the experience of using it as pleasant and engaging as possible. We want to track if improvements to the app are being felt over time by users (you!)

What will we be using survey responses for

Troubleshooting common issues and prioritising fixes/enhancements for the app. The results will be made available to everyone.

Take a look at the survey and feel free to suggest any changes you’d like to see (either to the question set or the survey plan itself). Cheers!

The results are in

Thanks to the 31 people who gave us some insight into their interactions with Status app last week! Amazing turnout

Raw survey data here, and below are some summaries (apologies for mismatched-looking copy pastes, I tried to embed the charts in this post directly, but ran up against a 413 error with too much html): 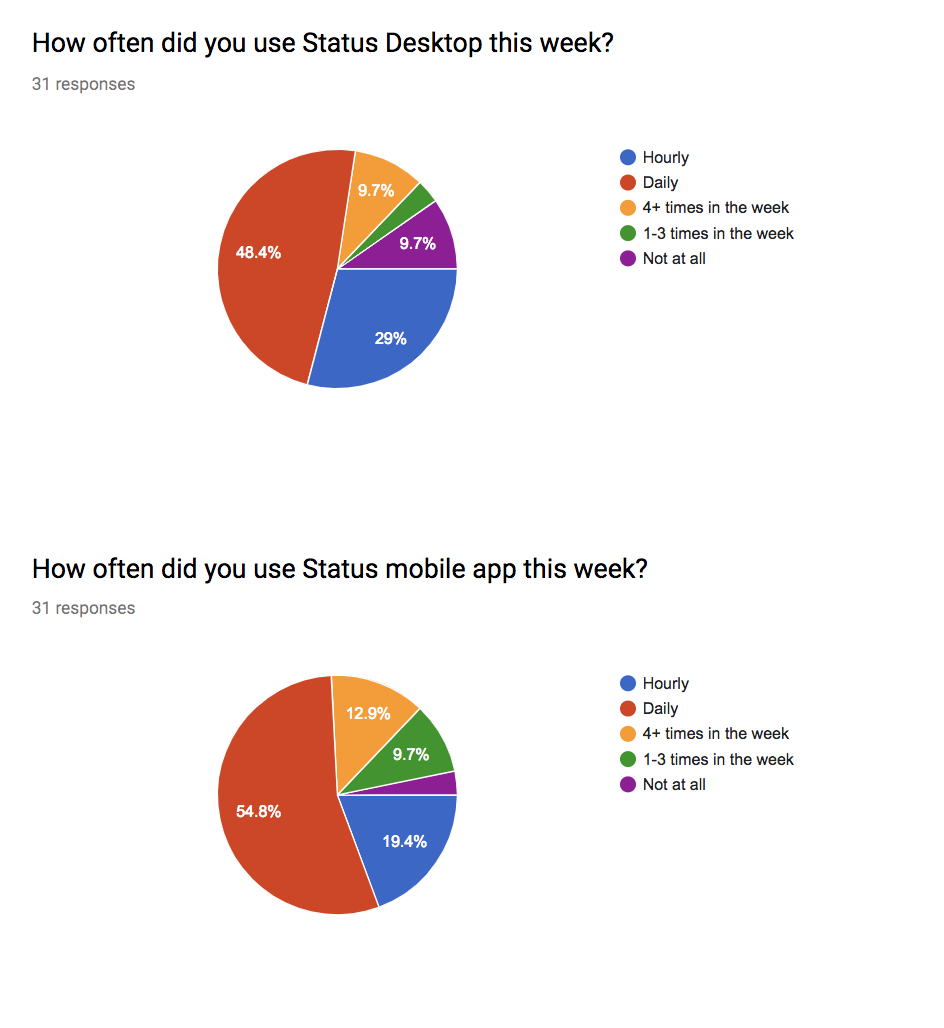 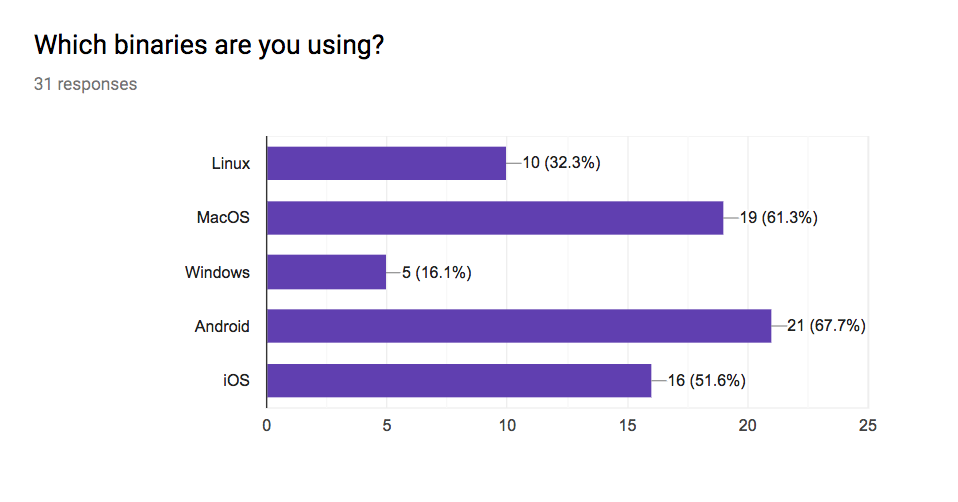 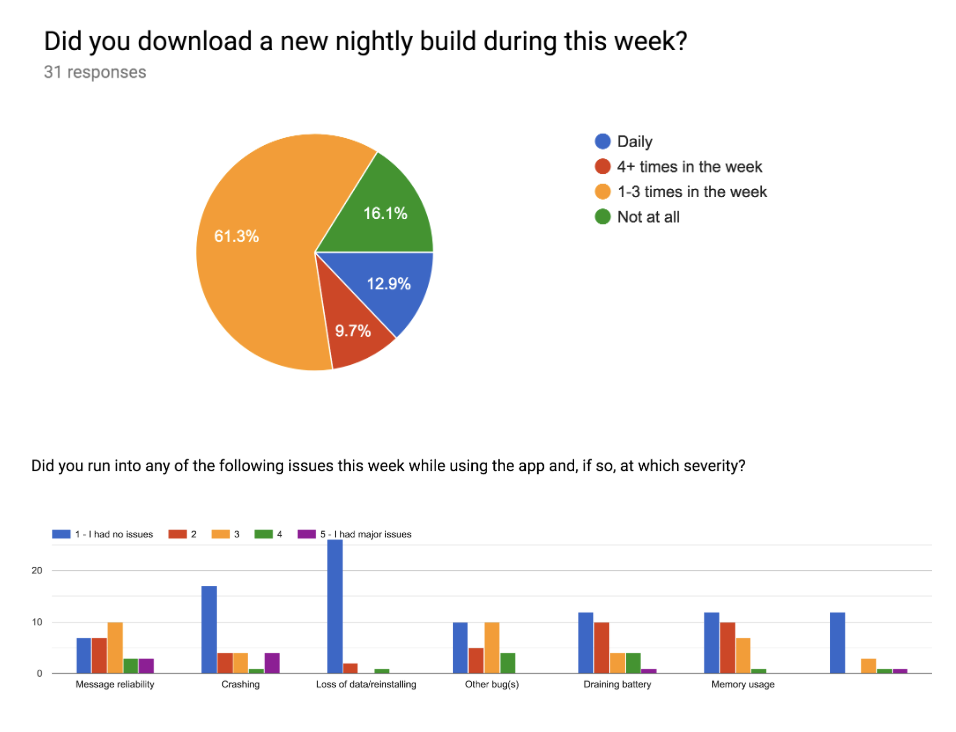 Other issues identified as per ^: 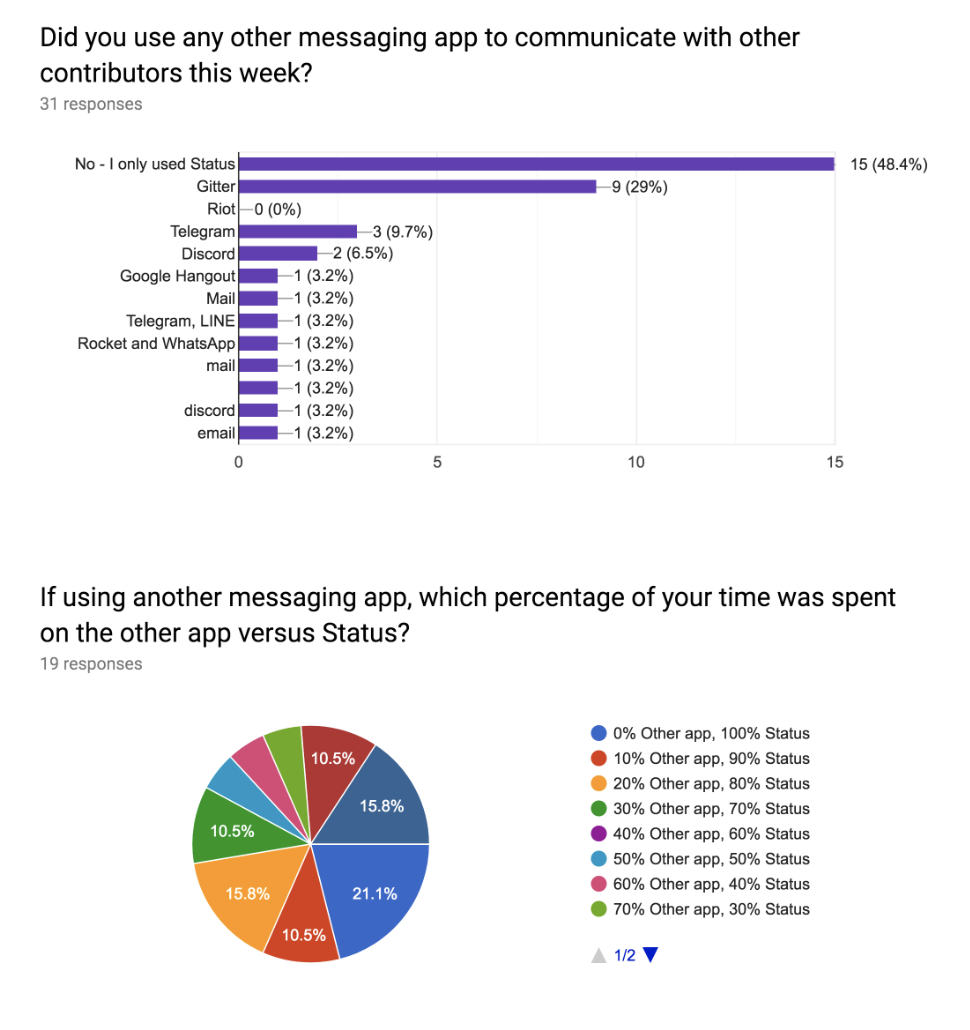 Is there anything in the app that you think should be fixed as a priority? [17 responses]

dark mode for status desktop, my eyes are BLEEDING

thanks for the insightful data.

Would it be possible to include a link to report issues in the survey (or ask a follow up question “Have you reported the issue on github” )? A few issues have been reported in the survey, but they haven’t been reported before or we lack of logs, which makes debugging and therefore fixing them really hard.
Thanks!

that is a great initiative!

I have 2 points of feedback:

Hi @cammellos and @igor - thanks for your input!

I made the following updates to the survey:

I didn’t invert the 1-5 scale for issues on the basis that doing that would make it a little bit tricky to compare future results against what we already collected, but lmk if you feel strongly about it and I will change them.

tricky to compare future results against what we already collected

tbh, it will be tricky to compare anyway, just because the previous ones were joint for Mobile and Desktop and the new are split. but I don’t have a super strong opinion on that one.

Could you add email as a mean of communication? Looks like 3 different people used 3 different spelling for it (mail, email, Mail)

Could you add email as a mean of communication? Looks like 3 different people used 3 different spelling for it (mail, email, Mail) 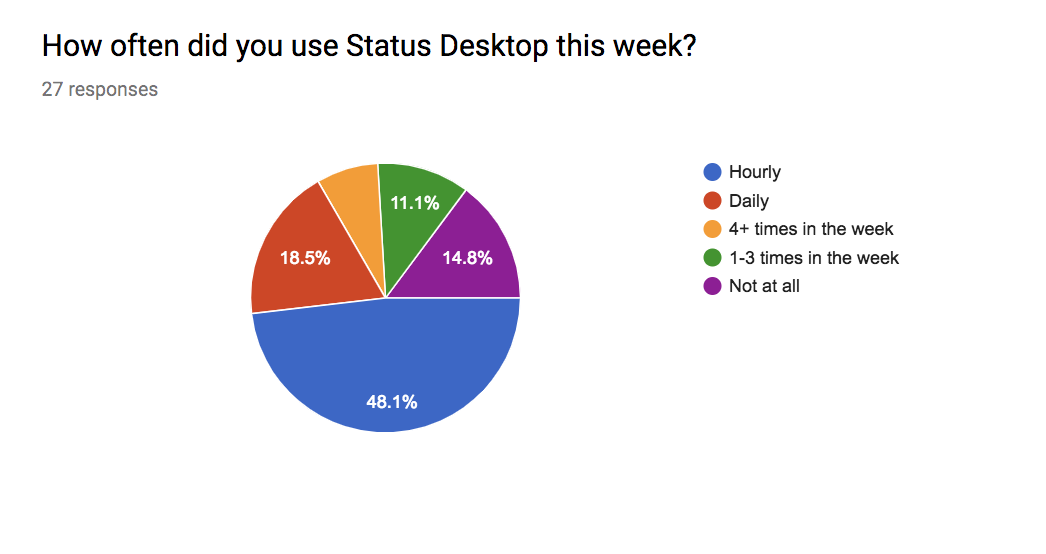 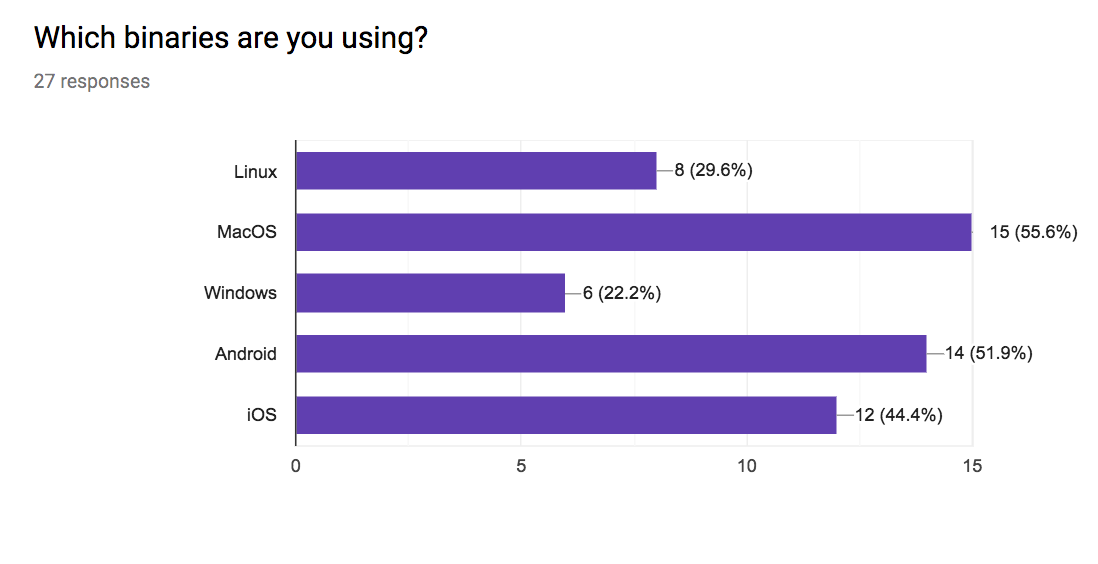 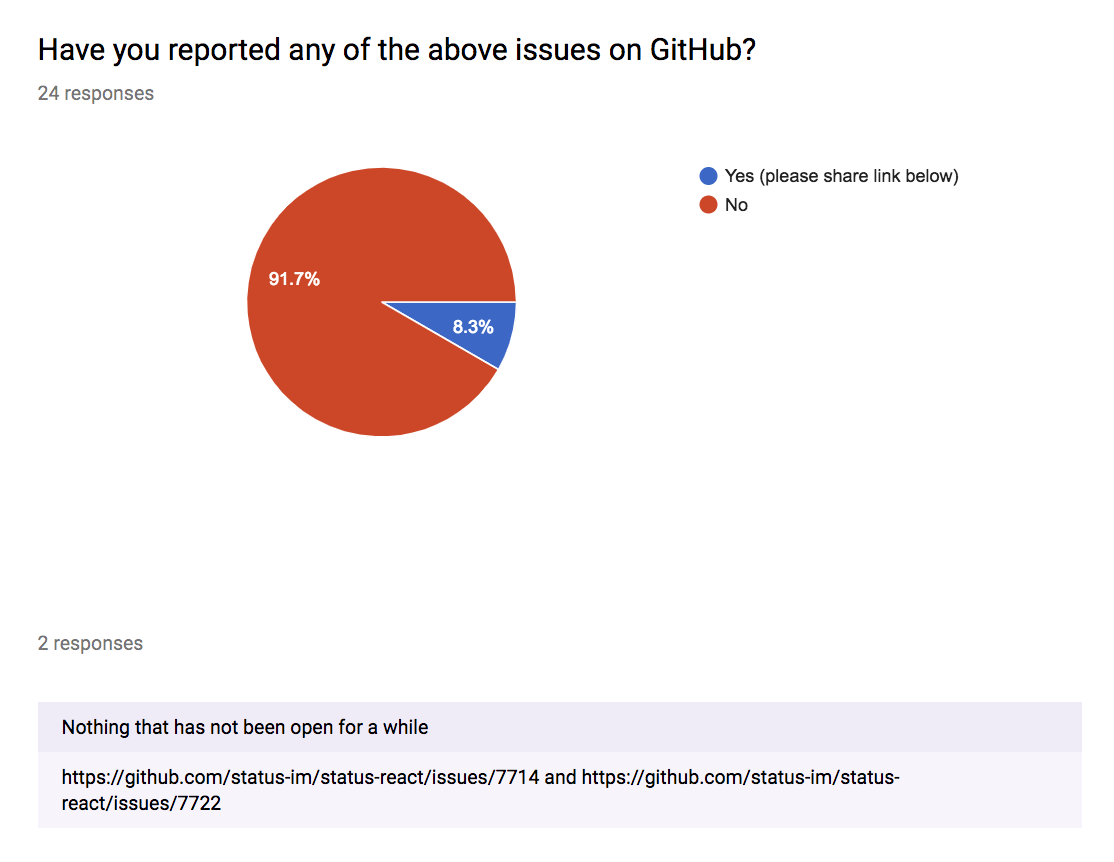 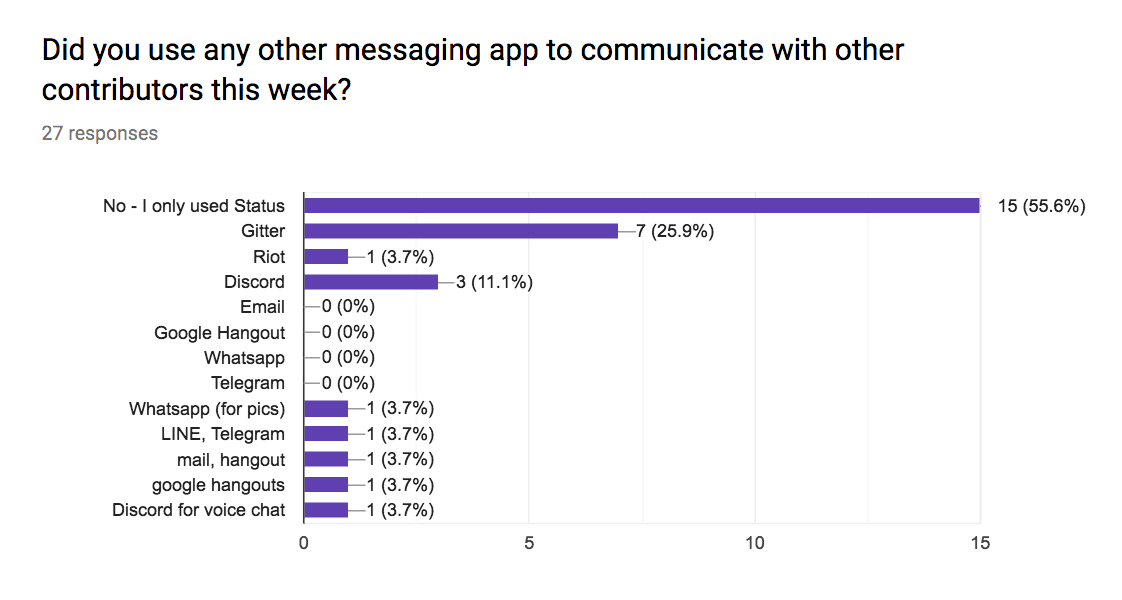 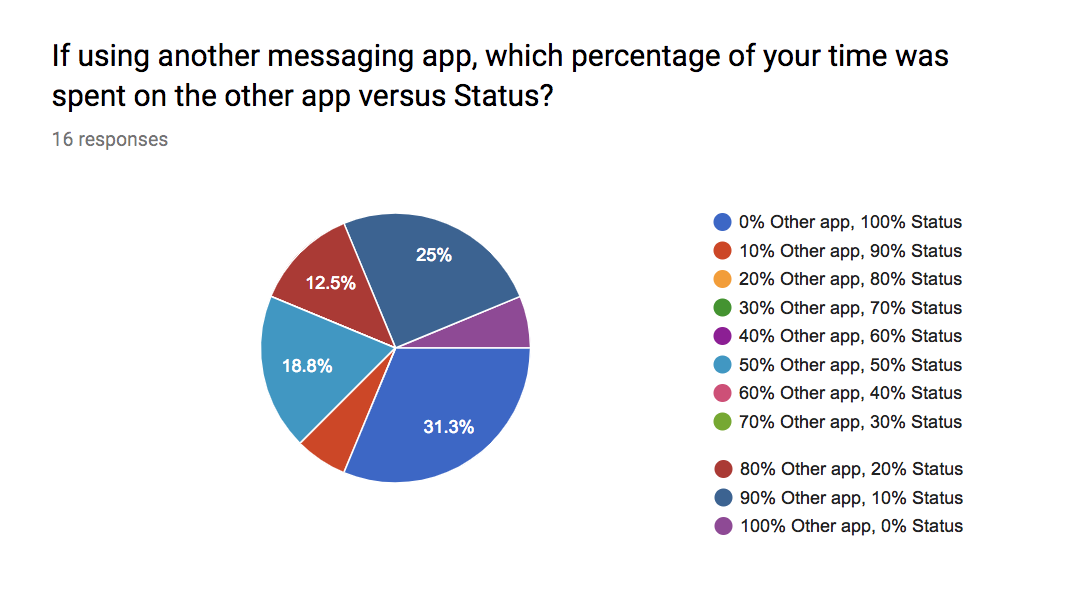 Is there anything in the app that you think should be fixed as a priority?

thanks for the data!

For whoever has syncing problems, looks like you are using the release version of desktop, which does not propagate info (the feature has been introduced later, so it will show as No info). In any case, contact me here on status directly (and anonymously if you wish) and we can have a look, it’d be helpful to see if there’s an actual problem or just a matter of versioning, thanks!

I recommend another way of visualizing the time spent in the other app vs status as the pie chart is hard to read with the data set up as is.

Perhaps some sort of point system where the time spent in status vs other app is a scale of 1 to 10 further weighted by the respondent’s engagement with Status in the first question and second question (whichever is more frequent counts), i.e. if hourly x1.2, if daily x1, etc. Then summarize the points, calculate percentage from theoretical maximum excluding the 0.2 bonus on the “hourly” and you get a kind of “preference” score. Where the answer for the distribution vs the other app is missing, count 10 points to Status if the answer in the Q before it was “Only used status”, and count 0 points to Status if the answer was anything but.

Here is my attempt at this. I hid some columns in my copy of the data to make it clearer and the functions are hacked up in an external google script. In this version, we get 75% preference for Status over anything else, which seems realistic to me given the number of answers we got and accounting for the fact that only those really interested in providing data will have participated in the survey, and are thus considered more enthusiastic and, by extension, Status power users. Of course, the calculations and factors would need to be further tweaked, but personally I’d find this preference score more revealing and useful than the current chart for this particular data.

Hi @bruno - nice idea! Check out the updated question with the answer as a linear 0-10 scale - wdyt?

Yup, that seems better, but it still needs to be weighted against hourly / daily etc when calculating imo. Just a little bit of a variance of 0.2x in either direction.

but it still needs to be weighted against hourly / daily etc when calculating imo.

Sounds good! I’ll try to add the calculation to the results when they come in 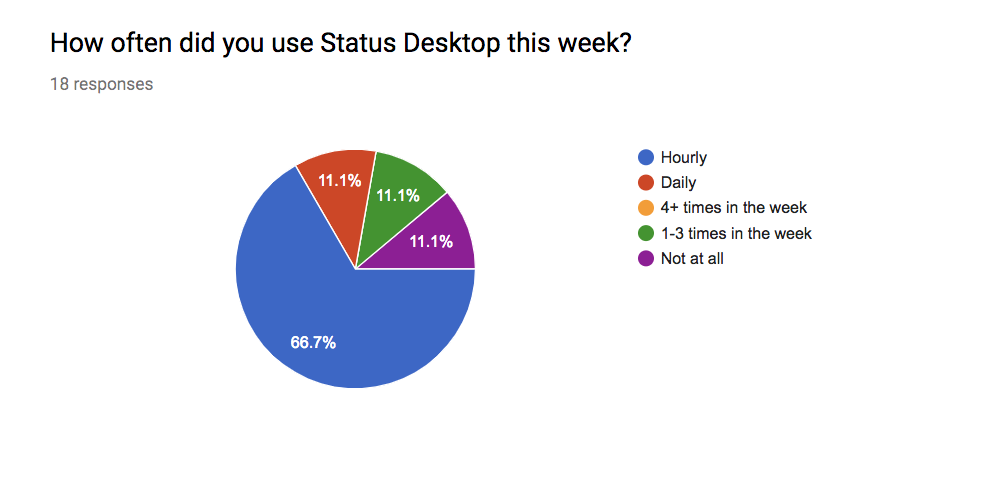 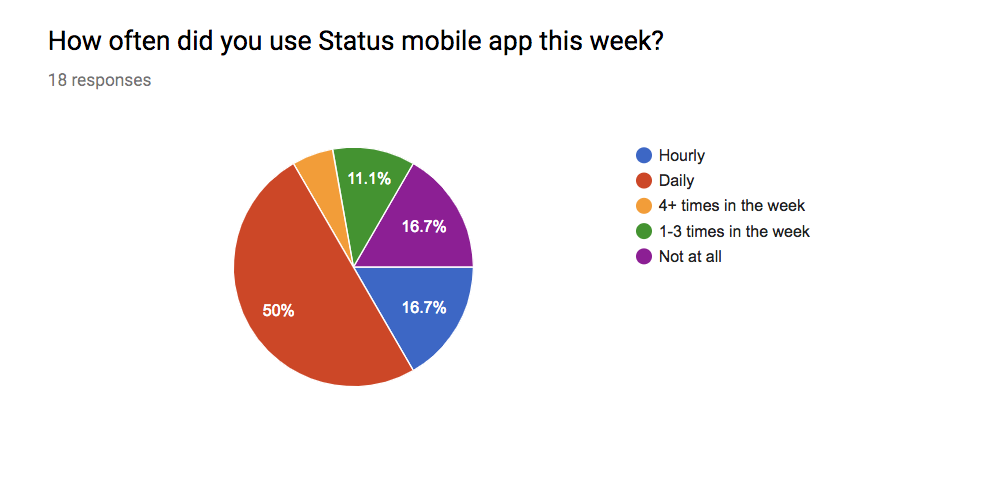 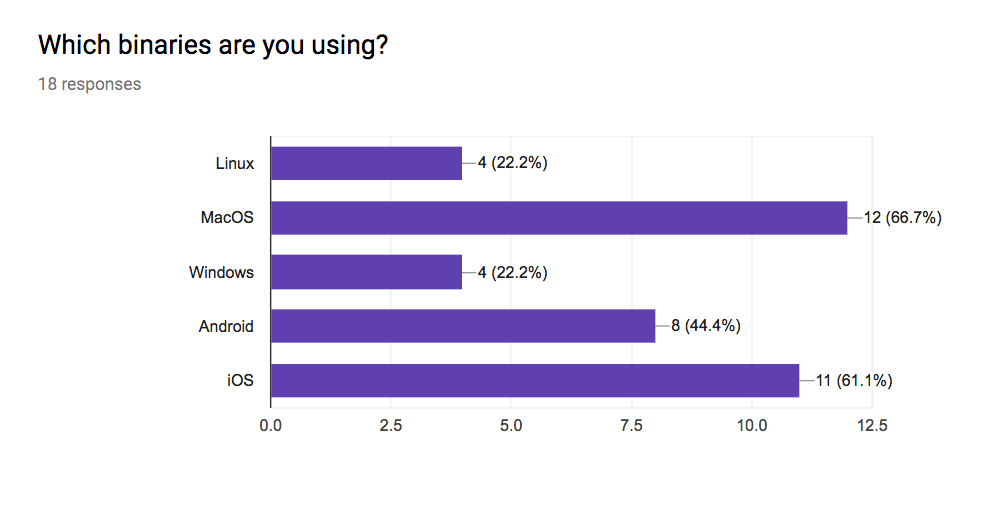 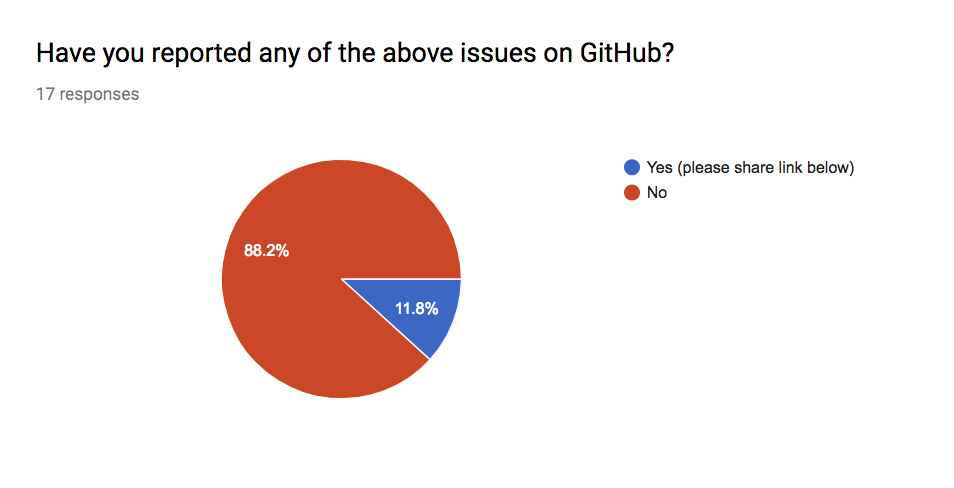 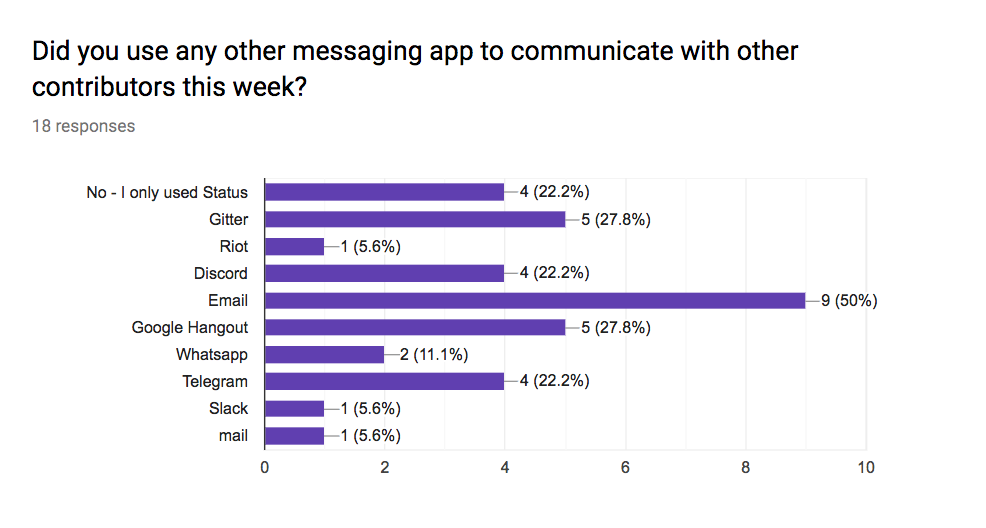 Is there anything in the app that you think should be fixed as a priority?

Maybe we should incentivize responding with some NFTs or reputation tokens to get more insight in the future.

Rather than incentivizing feedback, having the team show the improvements based on these polls should provide an intrinsic motivation for people to give feedback.

I’m mainly concerned around the “Have you reported any of these above issues on Github”. Almost 90% of people didn’t, which means these errors are being lost and/or we don’t see the scale/severity of them. I’m guilty of doing this, because the friction of starting a new issue (esp. when I’m on my phone).

Maybe we can have a “10 most common Status issues on GH” doc/site/discuss post, where people can simply open the GH link and

a post? Open to other ideas/suggestions for us to better capture feedback. cc @hester @igor

An idea from the passed:

A single scale rating in the app; hidden somewhere under About. So we can have continuous reporting without GH overhead. In a way an Instabug replacement. These would still need to be collected somewhere and somehow imported into GitHub. I’m sure there’s a way to automate this, it’s a matter of priorities.

Also @igor has raised this a few times. Lack of and utility of logs is insufficient to even resolve reported issues. This is on the Core backlog.