Overview for how automated test structured for Status app

As a part of CI for Status mobile app and in order to ensure there are no regressions appear after the changes in code (bug fix, new/updated feature) we are using automated tests (e2e tests).

For now we support e2e for Android only.
Whenever we need to push set of test scripts we create 24 parallel sessions and each thread uploads Android .apk file to SauceLabs -> runs through the test steps -> receives results whether test failed on particular step or succeeded with no errors -> Parse test results and push them as a Github comment (if the suite ran against respective PR) and into TestRail.

We push whole test suite against each nightly build (if the nightly builds job succeeded). Results of the test run saves in TestRail.
And also we push set of autotests whenever PR with successful builds got moved in to E2E Tests column from Pipeline for QA dashboard (https://github.com/status-im/status-react/projects/7). In that case we save results in TestRail as well and push a comment with test results in a respective PR. 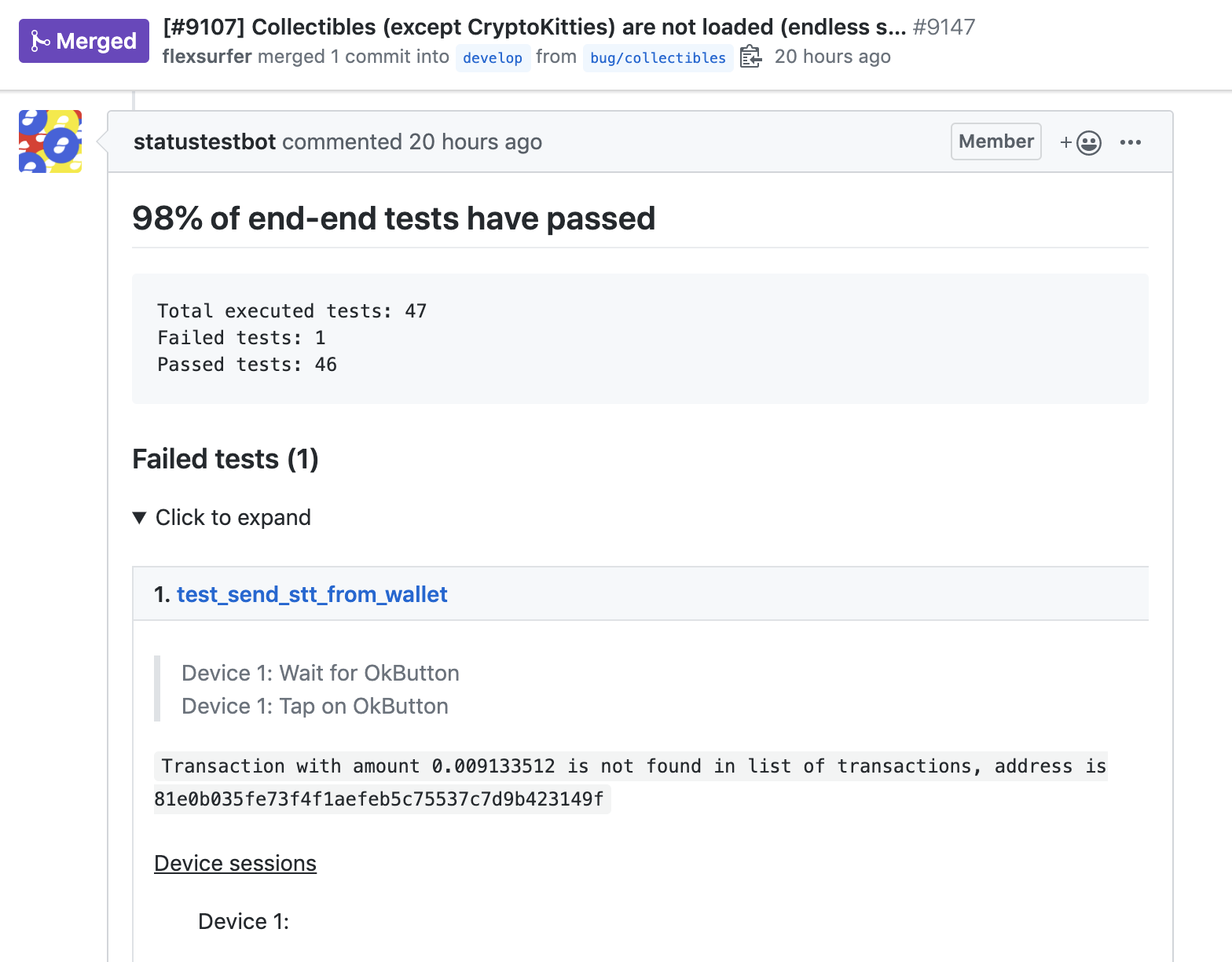 Opening any test run navigates you to list of test cases with results: 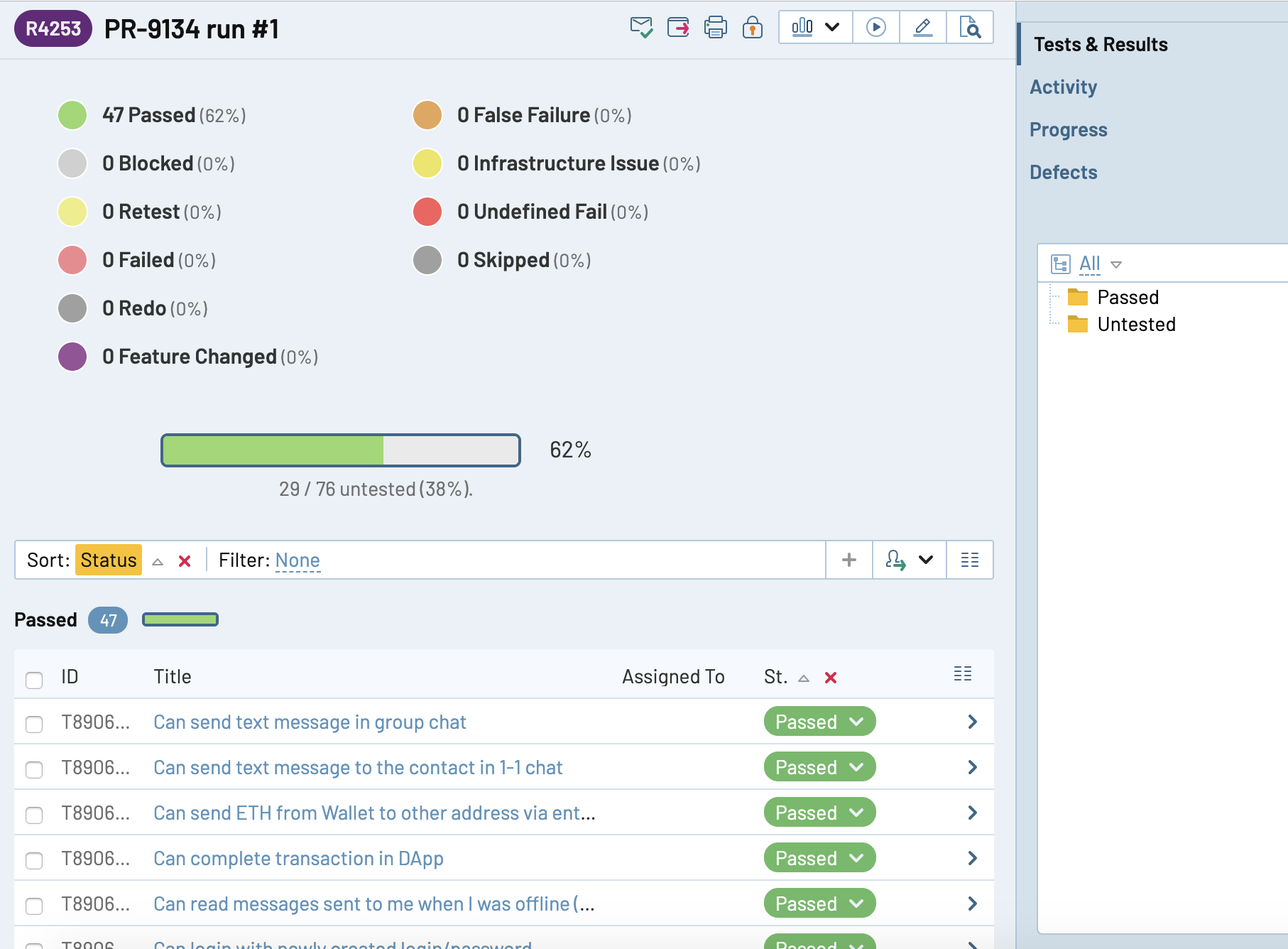 There are two main jobs in Jenkins responsible for the e2e test suite execution : https://ci.status.im/job/end-to-end-tests/job/status-app-end-to-end-tests/ and https://ci.status.im/job/end-to-end-tests/job/status-app-nightly/, where you can find a list of runs performed for PRs and Nightly develop builds respectively. Also there is an ability to start above jobs manually. Just click ‘Build with Parameters’, specify params (explanation what each param does below each editbox) and hit run. Job should be put in a queue.

You need to provide:

Once the job starts it picks up specified tests, runs them against provided apk and sends results to pull request.

Even we have 24 parallel sessions for testing it’s a time consuming operation (whole test suite we have automated at the moment takes ~40 minutes to finish). So for PRs we pick only set of Critical
tests (otherwise some PRs could wait their turn of the scheduled Jenkins job till the next day).

Analysing test results (and why test fails to pass)

After automated test run finished test results could be found in GH comment (if the test suite ran agaist PR) and TestRail. There are two states of the test: Passed and Failed. Test failure happens when curtain condition of test step has not met or automated test can not proceed execution because it can not find the respective element on screen it expects should be there.

Several examples of when test fails to succeed:

For example: here is the test results https://github.com/status-im/status-react/pull/9147#issuecomment-540008770 where one test failed. Open the test in TestRail and open session recorded for this test in SauceLabs 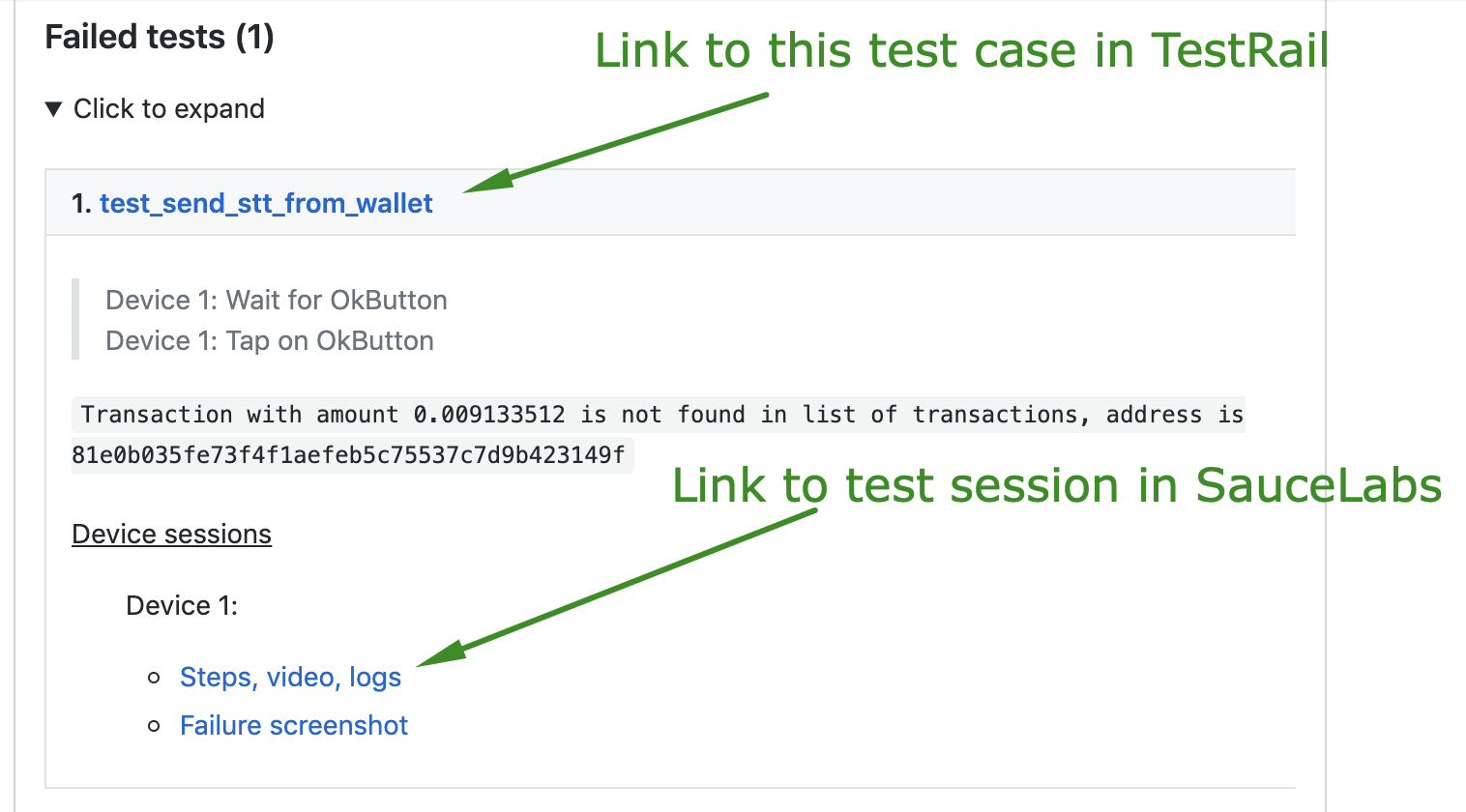 Not all features of the app could be covered by e2e at the moment:

Brief flow for test to be automated

Whenever there is a need to have a new test we first create a test scenario in TestRail. If certain item could be checked in scope of existing test case we update existing one (otherwise we may have thousands of test cases which is overkill to manage in TestRail as well as in automated test scripts). And also complex autotests increase probability to not catch regressions by stopping test execution (due to valid bug or changed feature) keeping the rest test steps uncovered. So here we need to balance when it makes sense to update existing test case with more checks.

Then we create test script based on the test case, ensure test passes for the build and pushing the changes to repo.

What’s the plans for automated testing?

What if we have dedicated e2e test before closing an issue as 'Fixed' as one of acceptance criteria now?

We think it makes sense for sure if it’s more critical for app than scenario we have now in queue to cover by automation, then yes it makes sense to be prioritised.
But what can certainly be done in this respect disregard severity of issue is creating a test case in test management and mentioning it in the GHI before it closed (well that’s among acceptance criteria from the recent time in PRs)

Your questions are welcome!

We have 24 session be running at the same time max.

Quick clarification, does that mean that we can run 24 E2E tests at the same time, or that we distribute the whole test suite across 24 sessions?

@andre it means that a suit of E2E tests uses multiple slots/sessions, not sure exactly how many, but it’s quite a bit.

This is the smart thing to do.

Right, so “24 sessions” is the limit we have at SauceLabs. I.e. we have 24 emulators for usage at the same time.
For example there is a test suite of 60 tests. We start 24 threads to use 24 emulators. 24 tests are running now. Once some test(s) are finished - another tests are picked up from a queue.
One note though, is that some tests require 2 emulators, so they need two threads (e.g. when we need to confirm a message received by recipient: contact from emulator#1 sends a message to emulator#2 who verifies that message indeed received)