There have been two initiatives recently to gather data from the Ethereum community in the form of text-based questions and interviews. Status has also been doing a lot of UX research and gathering all kinds of user data.

All this data needs to be analysed closely and shared with the public in an easy-to-understand way such that everyone interested in Ethereum can see directly what the biggest needs are, what really matters to people in the community, where the best opportunities are, what the most widely-used tools are, and where to find the most insightful and educational resources.

We have begun that here.

When it comes to data visualisation, you have several ways to analyze text.

So, how do we actually do this for EIP0 and ETHPrize (and all the other datasets to come)?

Sentences are broken down into “tokens” (i.e. individual words), which are organised in associative arrays. We then calculate the frequencies of these tokens and assign weights to them probabilistically to map out the interactive visualisation showing circles of linked ideas. 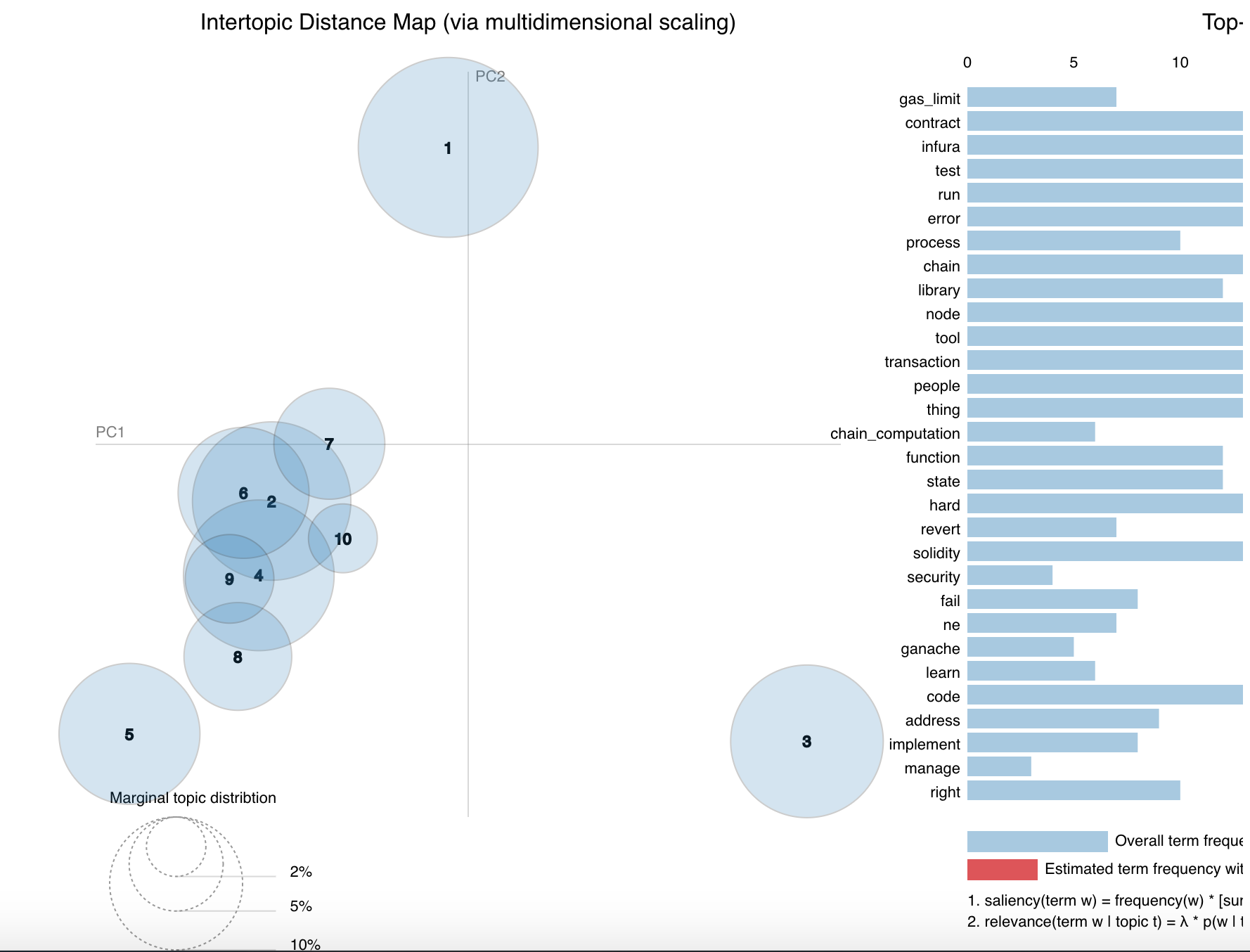 You might be asking, “What do the positions on the graph really indicate? And why do they become red when I hover over them and show up different bars on the accompanying chart?”

The size of any given circle indicates the weight of the topic in the whole dataset (closely related to the frequency with which certain terms were mentioned, shown in the red bars on the chart). You can use these frequencies, when the data is highly correlated, to decide on names and categories with which to understand the patterns discovered in the data more easily. Data still needs interpretation…

The actual positions of the circles on the graph have to do with something called the Principal Component Analysis.

Even though this is cutting edge stuff, there are no fancy neural networks at this stage. It’s also just difficult to handle the data, because it is totally non-numeric and unstructured. However, there are still some really cool things we can do.

We first need to do some manual tagging that will help the model identify what is important and focus its search for patterns around certain things we have taught it.

We use a library called Spacy, which is a neural network model trained on a dataset called Common Crawl from all web pages that are available in the world (literally growing by terabytes every month!). It’s made up of blogs, news and comments in English, all tagged manually (somehow?).

By tagging the data and training the model a bit and by using awesome libraries like Spacy, we can, for instance, build things that recognise only names in a text, and include them in a word cloud as opposed to the (prettier, but more scattered) one Alex van de Sande did. 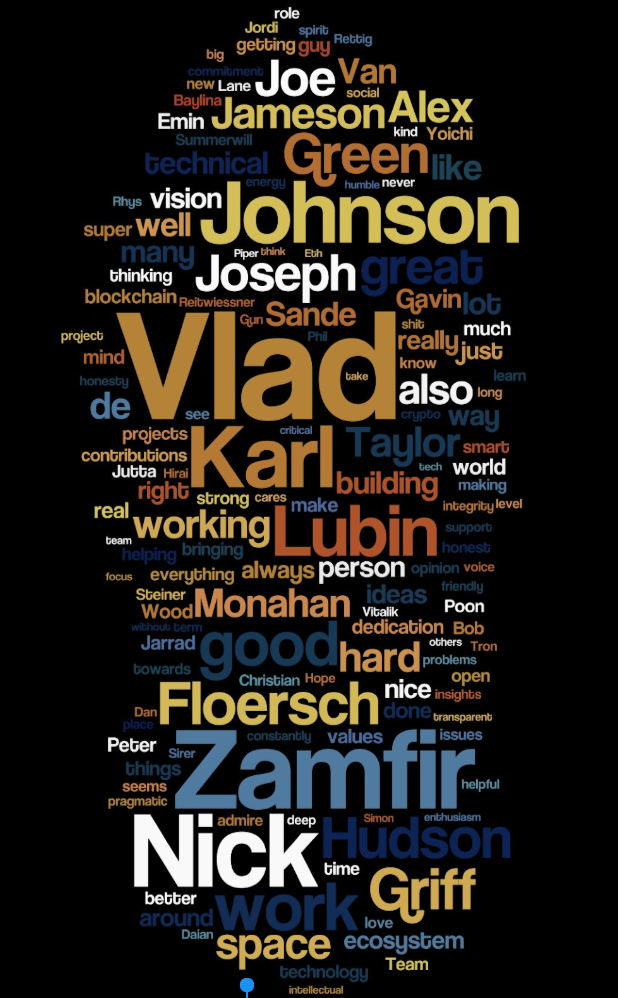 Which is cool, if you understand Ethereum, but not so helpful without a lot of context, which is exactly what we want to avoid. So we tag the data, run it through a neural net and produce the below: 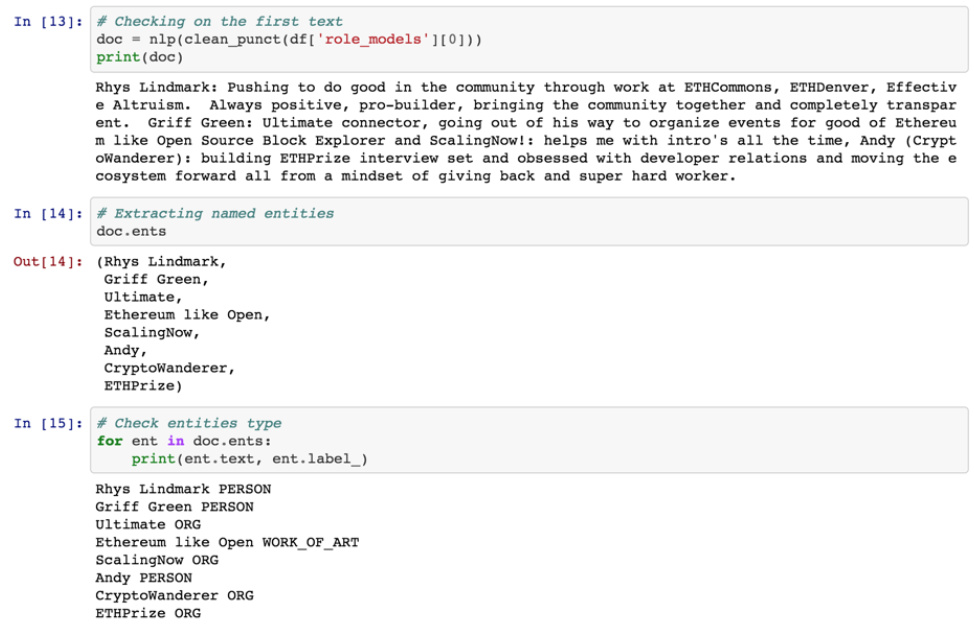 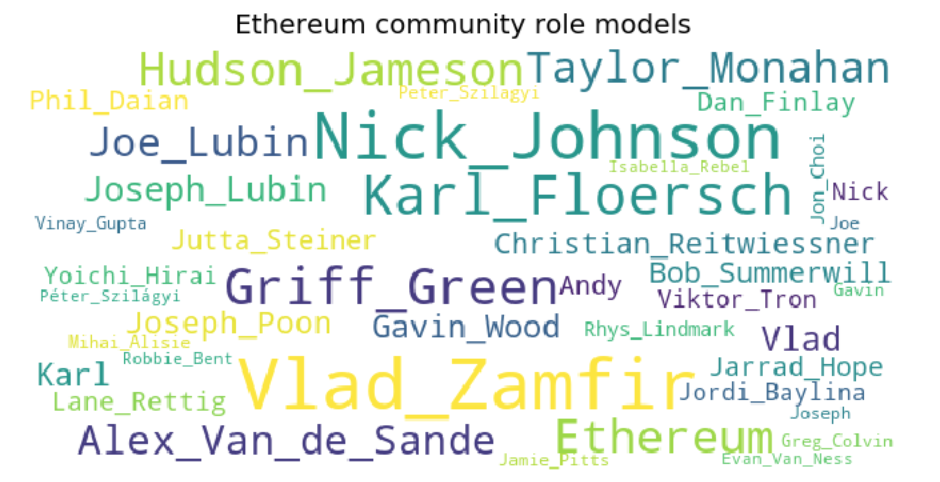 Even more exciting, we can create a dataset trained on GitHub, ethresear.ch, ethereum-magicians.org, Medium, developer news and tooling sites etc. and continually pull data in to analyze, as this sort of methodology scales very well.

This is amazing work! Still figuring out how to give +20 likes on this status discussion forum.

Andy, this is great! I love the data visualization field and wonder how we might use the machine-generated digests you’re proposing in combination with Edward Tufte’s viz methods to empower people to spot patterns and learn visually.

The machine learning processing approach could provide valuable insights when coupled with human feedback, and it’s very important to formulate the questions we want to answer very precisely. For example, if we wanted a list of qualities that people appreciate in role models, we could run a Spacy-powered name counter to get the top five role models on the question Who are 3 or more people in the Ethereum Community that make good role models? What do you admire in them?. Once we have five names, someone could look at all the qualities associated with these people and organize them semantically, which is very tough for machines to do at the moment.

The default Github CSV view doesn’t lend itself for qualitative analysis, so here’s a more human-readable version of the EIP0 Shared Values answers.

I want to reiterate (and with your help, refine) Andy’s goals for the analysis of these datasets.

Hey @ale - thanks so much for this feedback! Really appreciate it, esepcially the advice on how to tag - it’s still something Mamy and I have been discussing (his focus is on Nimbus, so he’s doing this in his spare time).

I think it’s important to keep the EIP0 stuff separate from the ETHPrize stuff for now, although there is some overlap, the goals are largely different. Best to ask @jarradhope for his thoughts on on goals for EIP0.