The purpose of this article is for us to surface any thoughts, comments, feedback and potential challenges so we can work through them collectively as a team. These are some recommendations which are all WIP and we can begin piloting some of these ideas and iterate as we go on.

Why do I come here and not somewhere else?

What should I walk away from this channel having learned?

Moderation and Management of Channel

The practical question of how this channel is moderated, who is responsible for responding/publishing/growing the channel?

We’d love to have this channel up and running before Devcon so this is what we’ve identified as next steps:

first of all, I’m super duper happy to see this thread kicking off. The day where a possible dev channel for Status has been mentioned in a Townhall meeting, was when I got very excited about this and I was hoping that this will happen sooner than later.

You may or may not have read a post I made the other day on On growing a community for Embark and increasing its adaption, but a lot of the thoughts left there align very well with this effort here, so it’s great that we can collaboratively come up with a decent strategy.

Big big thumbs-up for that!

Here’s some feedback, most of this is just underlining what has already been mentioned:

Currently we are running into issues of over publishing and being penalised by it.

I have to agree that @ethStatus is producing a lot of content on Twitter and as somebody from the outside (before I started at Status), it can be very very hard to keep up with everything. I had no idea that you’d actually get a penalty for over-publishing, but I think this could be seen as yet another sign that it might be better to put certain content into dedicated channels to spread publishing activities.

What steps can we take here to ensure that there is a content pipeline and we aren’t just becoming a non stop broadcast channel?

There’s certainly different ways to go about this and I honestly don’t have a lot of experience in how this is best done within a bigger organization where a lot of content and strategy is involved. It might be a good idea to plan the content being published over a certain time period. However, another possibility would be to keep this a little bit more “loose”, so that there’s isn’t too much effort involved in getting every single tweet out in the perfect moment.

I assume that the challenges will stay the same, because there’s probably a lot of dev related content that we could tweet about, but maybe one pragmatic and “first make it run” approach would be to introduce simple rules and say:

We will probably still sooner or later realise that there’s a “traffic jam” in content that should go out there at which point we’ll probably decide to introduce dedicated channels for different teams (Embark, Nimbus, etc).

The question has already been asked by the Embark, Incubate and PeopleOps team of having their own channel. The main challenge in this instance is reach, resource and what will have the most impact, we currently have new channels which we’ve launched who have full-time team members managing and contributing to the channel and yet growth has been slow and even after three months on avg content only reaches 7 people.

Yes, I can see that this is a tricky thing. So from my experience I can say that this simply takes time. Growing a follower base also means growing trust in your audience and community. And the way you grow trust and followers is by regularly posting content that is meaningful to your audience. Also here, the same applies that, some people might only be interested in a subset of topics, or all of them. That affects follower behavior as well. I for one once unfollowed a lot of accounts simply to clean up my timeline. I could do this without loosing news, because the accounts that I still follow retweet the content from other channels anyways.

For example, I can imagine that there’s a lot of Embark Developers that are really only interested in Embark related things. New features, fixes, tutorials, etc. Those people will very likely follow an official Embark account because they know, that’s where they get first-hand information that they get nowhere else. This might not be possible for channels that tweet about stuff that is accessible from different sources as well, as it makes it harder for followers to find a reason to actually follow that channel.

Either way, this always takes time, but I believe that with @ethStatus having 100k+ followers, this can be used as an accelerator for other sub channels. The rest comes from continuity.

Not super sure what’s meant by that. A tweet is a tweet is a tweet. Or do you mean creating images that have an overlay with every tweet? If that’s the case, this definitely improves the quality and engagement of the tweet, but also slows down the process of getting stuff out there as we always have to cycle through creating a dedicated image.

As mentioned above, something we can do, maybe not necessarily needed. But I do see that in a bigger organisation, this probably needs to be coordinated (hint: this gets easier with dedicated sub channels

Last but not least I can say how for example Google/Angular is doing it:

Anyways, those are just some thoughts. Hope this makes sense!

I think that’s very insightful feedback Pascal. Agree with much of it. We are building a community that is incredibly diverse and a one size fits all approach to social comms works only to a point. As awareness continues to grow inside and outside our space, there will be a growing need for more targeted messaging with select separate channels that are highly targeted. The primary Status TW channel would pluck the key content to share that aligns with our higher level brand strategy (ie who we are to the ethereum community and broader ecosystem). Test and learn!

Shawn and Team - thank you so much for proposing this and pushing it forward. I think it’s a great idea and would like to volunteer to create content and moderate (as part of the 5-7 for the first pilot) for this. I think Studio will be directly relevant to this audience. I am also glad that you will use hashtags to aggregate content around specific projects. Three questions from me are a) how can I help / how can I start contributing content to this? b) In addition to all the great objectives, could one of them also just be to solicit direct inputs / feedback / testing / flagging of bugs / complaints for any products or interim outputs relating to a product that we release? and c) In addition to growing the channel and how to source those growth members, how are we planning to seed / found the initial base of members of this channel (outside of membership from the core contributors)?

Hey @PascalPrecht @kim @akshifederici, thank you so much for your comments and considerations.

We’ve had some time as a marketing team to evaluate the next steps and hopefully we can work through some of the points you have raised in real time as they are all valid points and hopefully can be addressed through trialing with this channel. To reiterate we see this channel as a platform that teams can use to test their content pipeline and engagement strategies (with some help from the Marketing team in the process) and hopefully all spin off into new channels. The next steps we have identified are the following:

In terms of who the Marketing team member will be to help your team, they should be in contact. Also the channel is now officially live, thanks to the Embark team with some content already!!! Here’s the channel: https://twitter.com/ethstatusdevs, definitely give it a follow

Quick feedback: obviously that’s a personal taste thing, but maybe we can come up with a different design language / logo for the dev channel?

Right now it’s very black and sad. How about we use some coding related symbols for the channel? Similar to how Google Dev channel uses “< >” characters in their logo.

Glad to see this is happening!

Yea so @Ned came up with the design for the logo so I’ll let him chime in on what the thinking was.
I’m not particularly opinionated on the matter so I’ll let you guys discuss it here

My comments here are just to be seen as a suggestion. I think there is nothing stopping Status devs deciding to implement something that best represents them.

So to pickup where @ShawnS mentioned this. If you look at this sketch you will see that we are in the process of developing a unified system where all disciplines feel connected and represent a certain aspect that ultimately forms a whole. (Developers Logo included)

Currently we haven’t collectively agreed on this framework yet, the proposal is being drafted now to move forward after DevCon where each discipline will be interviewed on how they would like to be visually represented in terms of logos, identities, etc

If different parties choose a logo now and the consensus changes later, it will appear visibly ‘out of place’. Hence the decision to maintain the current logo until we can move again together within a visual framework.

In any case, I had also created some quick sketches earlier based on this topic that refer back to your comment. Perhaps the Dev Team would like to have a think about it? 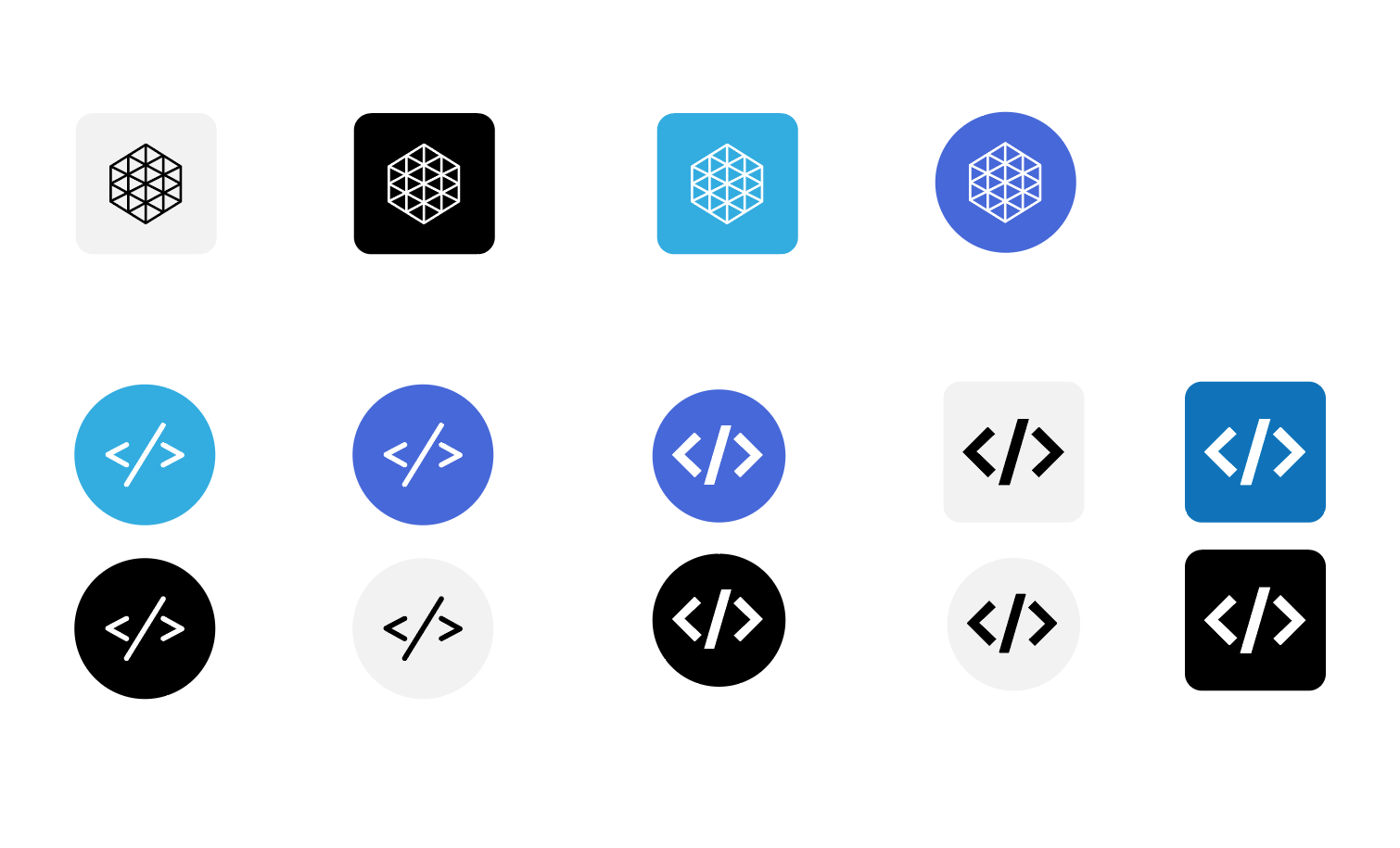 Currently we haven’t collectively agreed on this framework yet, the proposal is being drafted now to move forward after DevCon where each discipline will be interviewed on how they would like to be visually represented in terms of logos, identities, etc

If different parties choose a logo now and the consensus changes later, it will appear visibly ‘out of place’. Hence the decision to maintain the current logo until we can move again together within a visual framework.

In any case, I had also created some quick sketches earlier based on this topic that refer back to your comment. Perhaps the Dev Team would like to have a think about it?

I love the hexagons!