@Ned, @patrick and I had an initial call with Anam Raheem from Gaza Sky Geeks today to explore the possibility of setting up a user research project and testing of our apps with the local community (tech savvy freelancers, developers and entrepreneurs who are part of the GSG programs), as well as setting up bounty programs for local developers and freelancers to include them in the process of building Status, Web 3.0, and facilitate their contributions to open source software.

Vivek Singh from Gitcoin also joined the call to walk the GSG team through the concept of bounty programs.

More info on the local context in the Gaza Strip and Gaza Sky Geeks below.

The first idea is focused on user research. We could start by collecting info about their context for use of open source, crypto & blockchain technologies. At first, not limited to Status but more to understand what their day-to-day needs are in terms of information seeking, conversing, transacting, etc. to explore whether this type of community does represent a target audience for Status and its products. If this turns out to be the case, further down the line this research could be expanded to other similar communities and could inform our product decisions.

The second idea is focused on setting up “easy” bounties for developers / freelancers in Gaza who could contribute to Status and get paid in SNT. The capabilities of the developers who complete their programs include: ReactJS / React Native, HTML/CSS/JS and HandlebarsJS, building restful APIs using NodeJS and mongoDB or PostgreSQL, setting up and managing deployments using Heroku and AWS, working with agile scrum, collaboration using git and Github, and setting up CI/CD pipelines with Github, TravisCI and Heroku.

Vivek suggested that user testing could be carried out via bounties too, as here in the example of Colony’s 1-Hour User-Testing Project.

GSG team is open to exploring with us all the initiatives mentioned above.

If we agree that this project / direction are worth pursuing, we can start with setting up bounties for a small group of developers in the GSG program and figure out a best approach to user research / testing. We also would have to find out more about the local crypto landscape, usage and access.

If we agree that this initiative makes sense beyond the GSG community, I’d be happy to help set up similar initiatives in tech communities e.g. in Myanmar and Somalia.

Would be great to discuss this in Prague. Thanks @Ned & @patrick for joining the call today. Looking forward to everyone’s questions and comments.

I visited Gaza last year and was mentoring startups on the ground. I was very impressed with the quality of the GSG accelerator program, the participating startups, the incredibly hard-working, talented, motivated community, especially given their circumstances. You can find out more about mentoring options in Gaza here.

They are in need of mentors in the blockchain and web 3.0 technologies space.

One of the GSG developers was recently hired by a Berlin-based blockchain project Neufund and moved to Berlin.

I would love to join this convo! We created the standard bounties protocol (Gitcoin sits on top of this) and focus on non dev bounties, including educational & social impact programs in developing countries (Afghanistan, Venezuela, Philippines). Let me know when meet-up in Prague might be!

This sounds fantastic, I’m all for the idea of getting on the ground and using these new emerging systems that we’re creating to have an impact on the lives of those who need it most, plus great for R&D. I’d be happy to help out in anyway especially in the design/marketing department along with Ned and others. Looking forward to hearing more in Prague…

It could be a nice opportunity once the SkyGeeks community becomes familiar with blockchain and Status. Anam mentioned the mentorship program and said they have a more difficult time getting workshops to happen there. Perhaps in the future we could do a small hackathon or workshop there and see how we can begin to enable the wider community using Status for communication and exchange.

Anam from GSG got back to me with the following questions / suggestions:

@Simona @Alex @Ned @patrick and anyone else who wants to get involved - let’s meet tomorrow at 11am at the hackathon venue downstairs and discuss how to best approach this. Let me know if that time works.

@Alex We’re in the UX research room on 3rd floor.

For those interested in how this project evolved - we’re doing a remote workshop for the Gaza Sky Geeks developers community (graduates of their Code Academy, junior to mid-level web developers) tomorrow at 12:00 - 14:00 CET. So far 44 developers signed up. We will start with a presentation introducing Web 3.0, its context and origins, followed by an introduction to blockchain and smart contracts. After that the Bounties Network (@Simona) and Gitcoin (@notscottmoore) will talk about their respective platforms and explain how developers can get involved.

After the workshop the participants have an opportunity to join a smart contract development course organized in Berlin via the Redi School of Digital Integration for the refugee community here. This course begins next week and will be livestreamed to Gaza so that people there can take part in real time as well.

Big thanks to everyone who supported this initiative and helped made this happen! 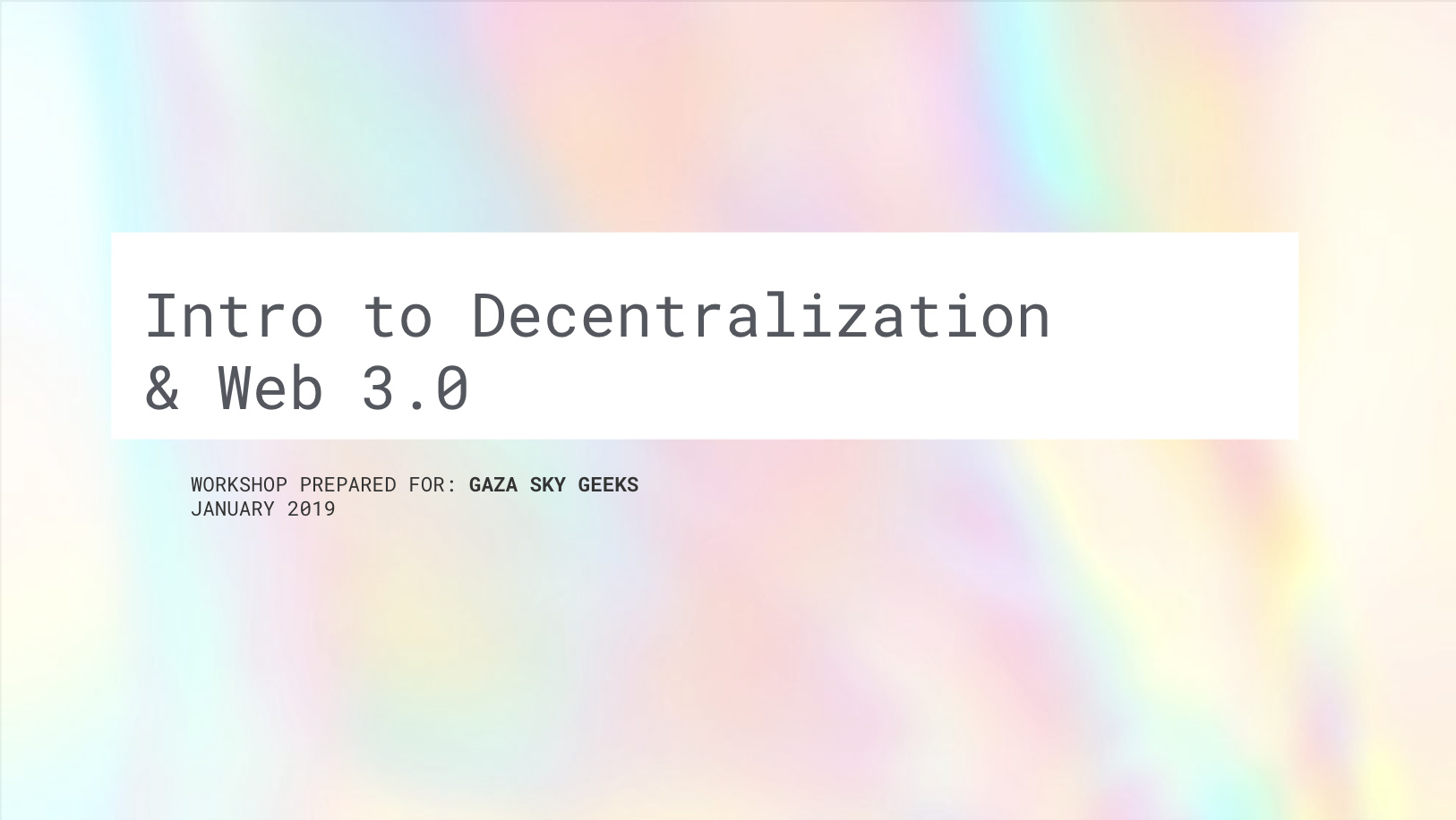