Whisper and Database keys on the Hardware Wallet

Since our account key path is m/44’/60’/0’/0/‭0, I propose assigning to these keys keypaths which are siblings of this path. The reason is that this way we minimize the amount key derivation operations needed.

To allows multiple accounts, I propose using a very high index which will not conflict with possible account paths. Since every component in the path is a 32-bit number, where the most significant bit is a flag to indicate hardened/non-hardened, my idea was to reserve the second most significant bit for keys we might need internally. This way we would have

The last component, if expressed in hex, is 0xC0000000 and 0xC0000001 respectively which is admitedly easier to remember that the decimal representation.

What do you think? Do you see any problems with this?

@michele I think it’s a good idea! And we are not even using possible account addresses because they would be derived with a normal index but we are using an hardened one.

I’m unfortunately not as familiar with this domain as I wish I was, so I’ll just ask some questions instead

I’m not quite sure if this is the best standard to look at, but according to https://github.com/bitcoin/bips/blob/master/bip-0044.mediawiki

Addresses are numbered from index 0 in sequentially increasing manner. This number is used as child index in BIP32 derivation.

Sequentially increasing manner would seem to imply we are breaking this spec?

Public derivation is used at this level.

So how does that jive with us using hardened derivation? I don’t follow this part.

What do we mean by “database key”? What’s in this database exactly, does it have a more specific name?

The Status app keeps a database to store some info (I do not know exactly which, but I understand mostly chat logs). This needs to be encrypted so a key needs to be generated

How valuable is it to have a low HD key path?

What do you mean?

How do other HW wallets etc solve this problem? More generally, how do people like to separate hardened keys?

We are not actually separating hardened keys per-se. We are separating wallets from keys used for non-wallet purpouses

How extensible is this design? As an example, let’s see we in the future use 3-5 different protocols/keys (eth/whisper/swarm/foo/bar), and for whisper and eth we want to be able to have many child keys, one for each app. How would this design accommodate that? Imagine different identities and so on. Would they be at the m/44’/60’/XXX’/0/‭0 level then?

It is extensible since we have about 1 billions possible non-wallet keys following my scheme. Another billion keys is reserved for wallets. Since we have such a huge keyspace, we can keep all the keys at the same level (so far, I have defined only 2 possible values, but others can be added)

The keys we are describing are not wallets, so the BIP44 specs do not apply. The proposal was to use the mechanism described in BIP32 to derive the others keys we need and place them in the keyspace so that they do not conflict with wallets. This way, even when changing device, using your 12 (or 24) words backup you can restore all of your keys, not only wallets.

Using hardened or non-hardened in this case is actually not important, because all keys generated at this level will be leaves (won’t have further nesting).

The reason why I am using the hardened flag and the next bit to split the keyspace is for “future compatibility”, if some BIP comes out defining that the hardened flag is used for some specific wallets we will be able to support it without breaking our current keyspace, since we use a further differentiation bit.

Another key point in this process is attempting to not overlap derivation paths with ones typically used in other wallets for value storage. The “non-wallet” keys that we derive and use need to statistically never have funds in them if someone imports a wallet from another application.

Yeah, since I have used a very high index and hardened keys in my proposal, whereas the accounts are normally unhardened and use a sequential number starting from 0, the chance of someone using that index should be basically non-existant.

There is another issue regarding how we are going to implement this key export in the applet. At the moment, we have an hardcoded list of paths we allow exporting. This is great from a security standpoint, but does not allow extending the list after the applet is installed. So I see 3 possible solutions

Unless we go back thinking about a complete different path where we have a root of exportable keys. But if I understand correctly having a completely different path means slowing a lot the derivation from the card.

To second Michele point about the risk to overlap with other wallets paths for value storage, here’s the most complete list of bip44 paths used by wallets that I found (this is MEW popup when connecting ledger) 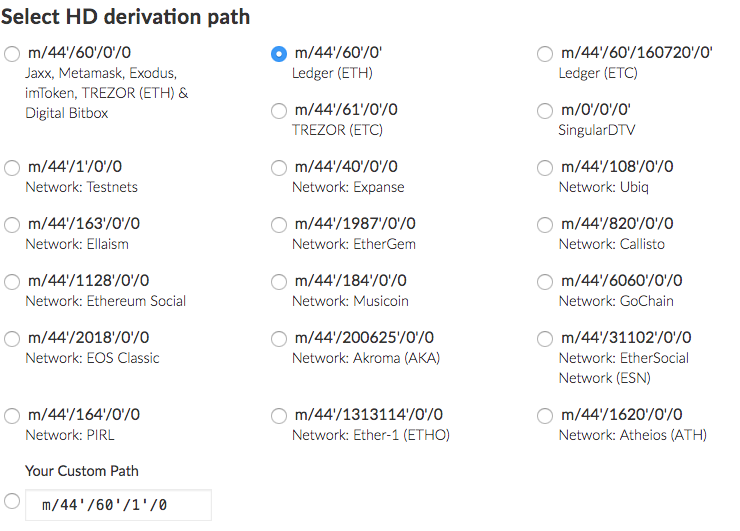